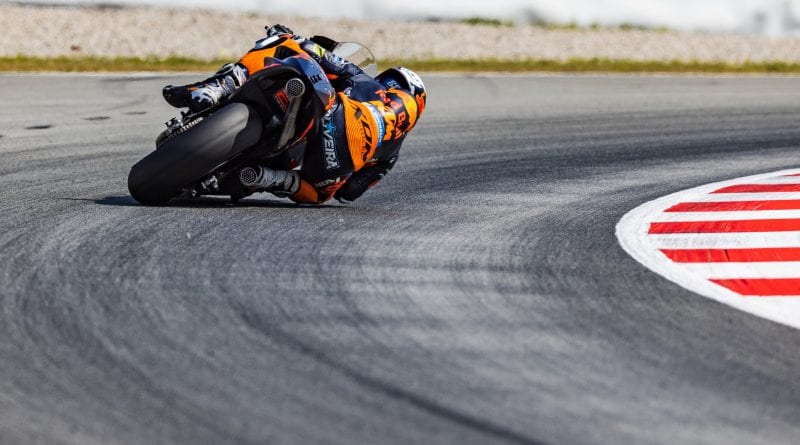 Miguel Oliveira was once again victorious on his KTM following their updates including 3D printed chassis parts, KTM run steel frames instead of the normal aluminium or carbon frames which are more commonly used, this frame which has previously been criticised by sofa warriors is extremely effective and clearly works for KTM. They have the advantage of being able to 3D print parts for their frame, check them before adding them to a bike and testing them in record speed, they have added these updates in Mugello which helps with reducing tyre wear and aiding the bike to feel better when cornering, this updated combined with their new fuel has rocketed them up the timesheets with Oliveira following his Mugello podium with victory in Catalunya. Oliveira was able to stick with Fabio Quartararo after the Frenchman overtook him early on to lead the race before Oliveira would best Quartararo and hold the P1 position all the way to the chequered flag.

The race started with pure chaos, Marc Marquez and Aleix Espargaro both made up huge ground early on with Aleix Espargaro briefly running as high as second place, Aleix showed incredible speed and force and it is a testament to the updates Aprilia have brought to the table, unfortunately, the Catalan rider would crash out at turn eight, the same corner Marc Marquez fell foul to after a great start of the race. Marquez showed glimpses of his old self riding massively aggressively and sliding around, it was a pleasure to watch until he crashed out very early on. Another crasher was Valentino Rossi who’s career seems to be slowly coming to a halt.

A rider who had a rocket start was Joan Mir, the World Champion rocketed from P10 on the grid to make up enough ground to be in a podium position in the opening laps running in P3, eventually, he would drop back to fifth overall in the race after being bested by the straight-line speed of Johann Zarco and Jack Miller but he can be proud and happy with how his race developed.

Johann Zarco’s speed was unbelievable today taking a second-place finish, he marched his way past Joan Mir, Jack Miller and Fabio Quartararo to take third place cutting nearly a second into Miguel Oliveira’s race lead to finish only 0.175 seconds behind Oliveira who opened the last lap with a lead of 0.4 seconds, if the race had one more lap we could have seen Zarco take his first-ever win.

Now in one of the most bizarre things you’ll ever see, we had Fabio Quartararo showing off his six-pack to the fans having an issue with his suit, unzipping it mid-race, throwing out his chest protector before riding around with his suit unzipped. If you look at the rules you will see that it’s against the rules to ride without a chest protector which was what Fabio Quartararo was doing, he should’ve received a black flag during the race, this is fact not speculation, this coupled with Quartararo riding around with his suit wide open is hugely dangerous, if he were to crash the damage would’ve been unthinkable to his bare skin on the tarmac. He finished in fourth place after being handed a penalty for using the long lap penalty in turn 1 and was demoted from P3 to P4 with an impressive Jack Miller in third. Miller had a great start of the race from the front row and was able to ride consistently within the top 5 eventually being rewarded.

Brad Binder was another rider who had an amazing race, the KTM rider also has the new updates and is reaping the rewards with a very strong P8 finish ahead of Franco Morbidelli and Enea Bastianini who finished as the top rookie.

For Jorge Martin it was a disaster before everything even begun after crashing on the sighting lap, he was forced to start from the back of the grid and came home in a very impressive P14 with Lorenzo Savadori putting a point on the board for Aprilia in P15.

Both Tech3 KTM riders crashed out of the race, not what they wanted if they wanted to get a 2022 seat. 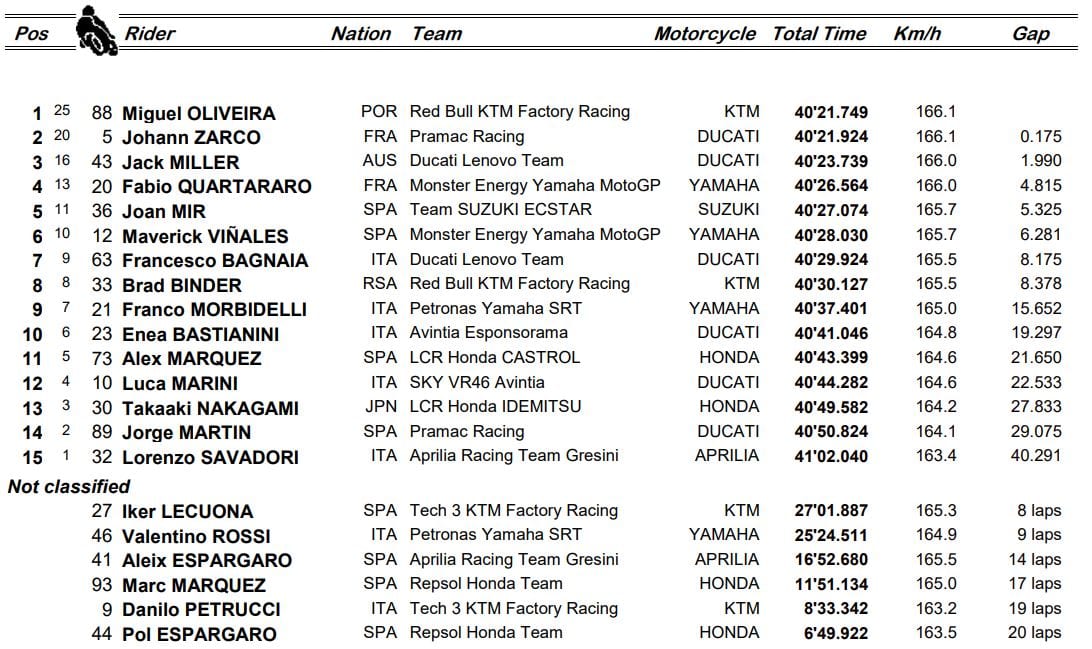 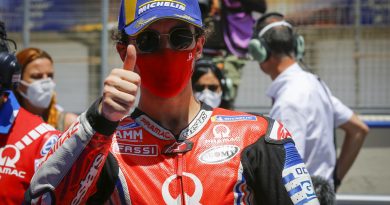 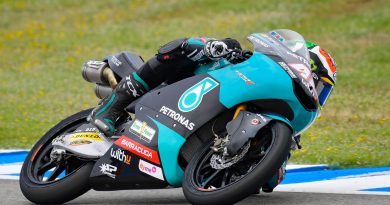 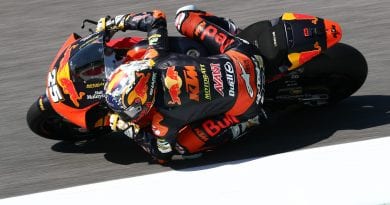