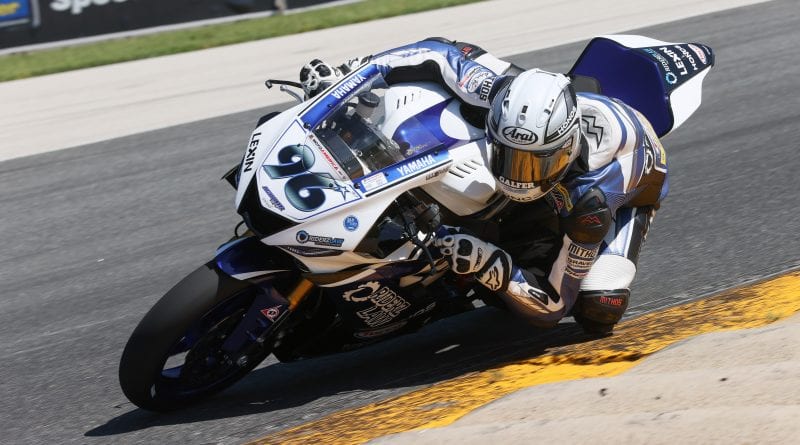 Recently it was announced that 2017 Superstock 600 champion Jason Aguilar will move to the MotoAmerica Superbike class for 2021 riding a Yamaha YZF-R1, receiving support from Westby racing and Attack Performance to give him the best chances possible of fighting at the front of the field.

He spent the last few seasons in the Supersport class and finished in P4 overall in 2020 and feels that now is the right time to step up to a 1000cc beast and challenge himself.

Do you recall the first time you got on a motorcycle?

The first time I ever got on a motorcycle was late 2006. It was for my 10th birthday. I had never ridden a motorcycle before, always just been on a bicycle. The story behind it was I went to an AMA Superbike race at Fontana (Autoclub Speedway), very close to my house. There was a booth set up with pocket bike-type stuff. The series at the time was called SC Mini GP. I thought it was pretty cool and asked for a pocket bike for my 10th birthday. I convinced my parents to let me do it and that was the first time I ever rode a bike. They were doing little drills and such, getting kids to learn to ride a 2 ½ horsepower pocket bike around the pits. The guy that was giving the lessons felt confident enough that if I wanted to go ride around on track and do the race I could if I wanted to. I didn’t know what to expect and I was definitely nervous, but I was like ‘let’s do it.’ 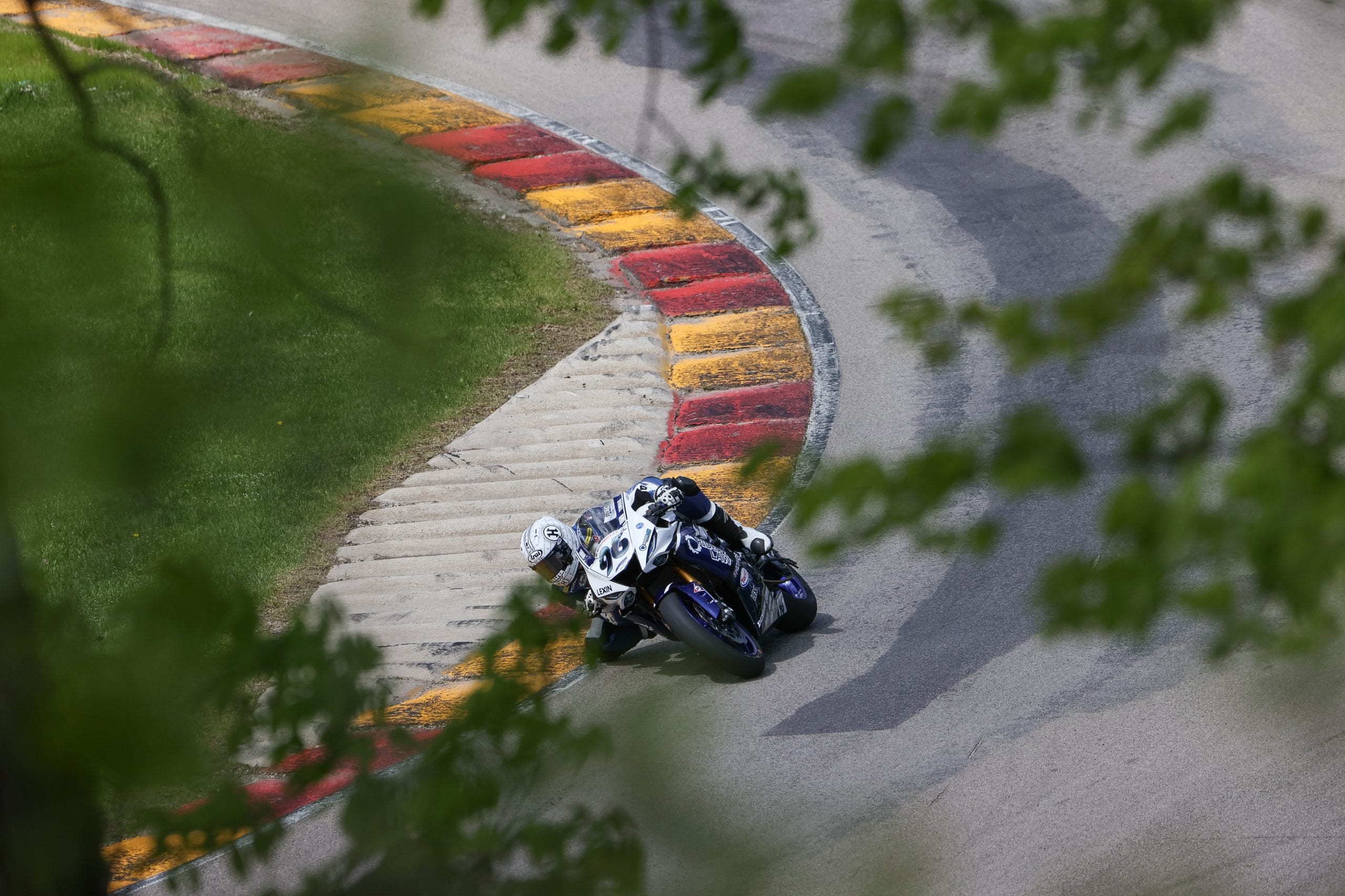 Did any of your family race?

No, no one in my family raced. My dad rode a dirt bike when he was younger. My grandpas rode dirt bikes, but no one ever raced motorcycles. The way I sort of got into it was my dad used to work for American Honda back in the day and he would run their finance department. At the time, that was when Nicky Hayden was riding for Honda in AMA Superbike and eventually, he moved up to MotoGP. My dad would come home with racing posters of Nicky Hayden. Then MotoGP came back to Laguna Seca in 2005 and we went out there to go watch it. It was amazing! Being a little kid watching that stuff, it was crazy. My favourite rider at the time was, of course, Nicky Hayden and he won there in 2005. That was one of the best days of my life. And then we went back in 2006 and he won the race again. After he won the championship, I knew that was something I wanted to do. That’s when I found the AMA race with the pocket bike lessons and thought let’s do this.

After the pocket bike experience, what bike did you start racing on?

After the pocket bike race my dad ended up buying me a pocket bike called the Blata 2.6 at the time. I went to a track called Rialto Airport Speedway in Rialto, CA in the wintertime and I would just ride and ride, doing lap after lap trying to get better and faster. We decided to enter the 2007 race season in the pocket bike class which was really competitive at the time. The first race in 2007 I finished 2nd and won the next race. Later in the season, I went on to win the championship.

So, is it safe to say that Nicky Hayden was your racing hero growing up?

How did your relationship with Riderz Law Racing come about?

I got with Riderz Law in 2017. They’ve pretty much supported me ever since. In 2017 I was running my own race team for the first time and was looking for sponsors. I actually just came across their name in one of the magazines I was reading. I looked them up, saw they were local and thought these would be great guys to try to do something with if they’re interested. So, I hit them up and went over there and we talked. They’ve also been a great supporter of my race team. They’ll be the sponsor again this year. 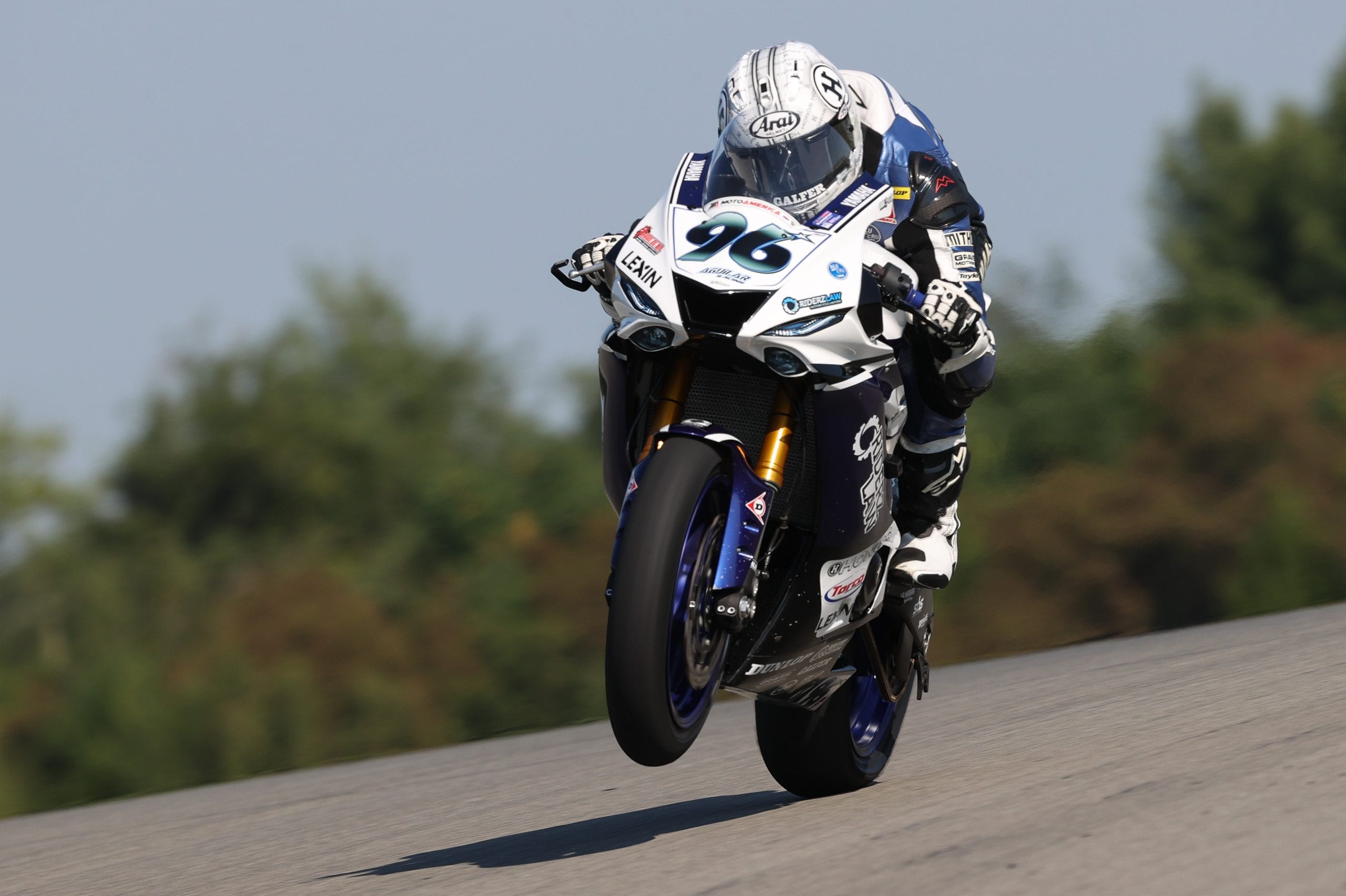 You’ve been riding in the 600 Superstock and 600 Supersport class but are now making the jump to full superbike for 2021. What were the deciding factors for you to make that move?

At the end of the race season last year, I was debating what to do. Everyone was kind of jumping on the Kawasaki ZX-6R bandwagon, saying it was a better bike. I still thought the [Yamaha] R6 was a better bike but it’s hard to compete with what seemed like the extra power of the Kawasaki. But I think their main advantage was getting in everyone’s head.

I’ve had a very good relationship with Yamaha and was still deciding what to do when I found out the R6 is going to be no more. It was unclear if there was still going to be contingency money on the bike or if they were still supporting that. You know, it’s hard to race on a bike and be at the front if there’s not really any good contingency, that’s one of the big advantages you get, especially if you’re running your own team. You need everything you can get.

At that point I thought I’ve always wanted to explore going to the 1000s. I explored going to the Superstock 1000 class, but I realized it wasn’t really a step in the direction I wanted to take. For me, I feel like on the hierarchy it would go Superstock 1000 then Supersport being a step up, then Superbike. It just seemed like going to Superstock wouldn’t be the best option for me. With having conversations with other Superbike people like Kyle Wyman (Kyle Wyman Racing), Chuck Giacchetto (Westby Racing) and Richard Stanboli of the Attack Performance Team that it just seemed like everything was coming in place to run a Superbike effort. With all we could do and the relationships we had; it was just too good of an opportunity to pass up.

I understand you’ve entered into an arrangement with the guys at Attack Performance and the Westby guys, tell me a little bit about that.

The biggest thing about Superbike racing is just having the knowledge. I come from building a Supersport team and Supersport bikes and that’s a little easier because there’s not a lot of things you can change on the bike. For the most part you’re still on a fairly stock bike. When you get into the Superbike paddock, in order to be on something competitive, the only parts on the bike that are stock are the frame, the air box, the throttle bodies and the internals of the motor. There are so many parts that aren’t stock anymore and in order to know everything you need to get you really need the knowledge of guys that have been there and done it at a very high level.

Those guys are giving all the advice I need. Richard (Stanboli) is an electronics genius so we’re going to be running a (Magneti) Marelli system and he is going to support us with all the maps, anything we need. When you have the option to get support like that it’s super hard to pass up (laughing). Other stuff like parts that will be available. It all adds up for you to be able to run a more competitive Superbike team without having to have a 10-person crew and 2 years to try and figure out what works and what doesn’t work.

My team is just run by me, and a couple of crew members. We’re a very small team. I don’t have the budget of a big team to go and test a whole bunch of stuff to see what works and what doesn’t work. 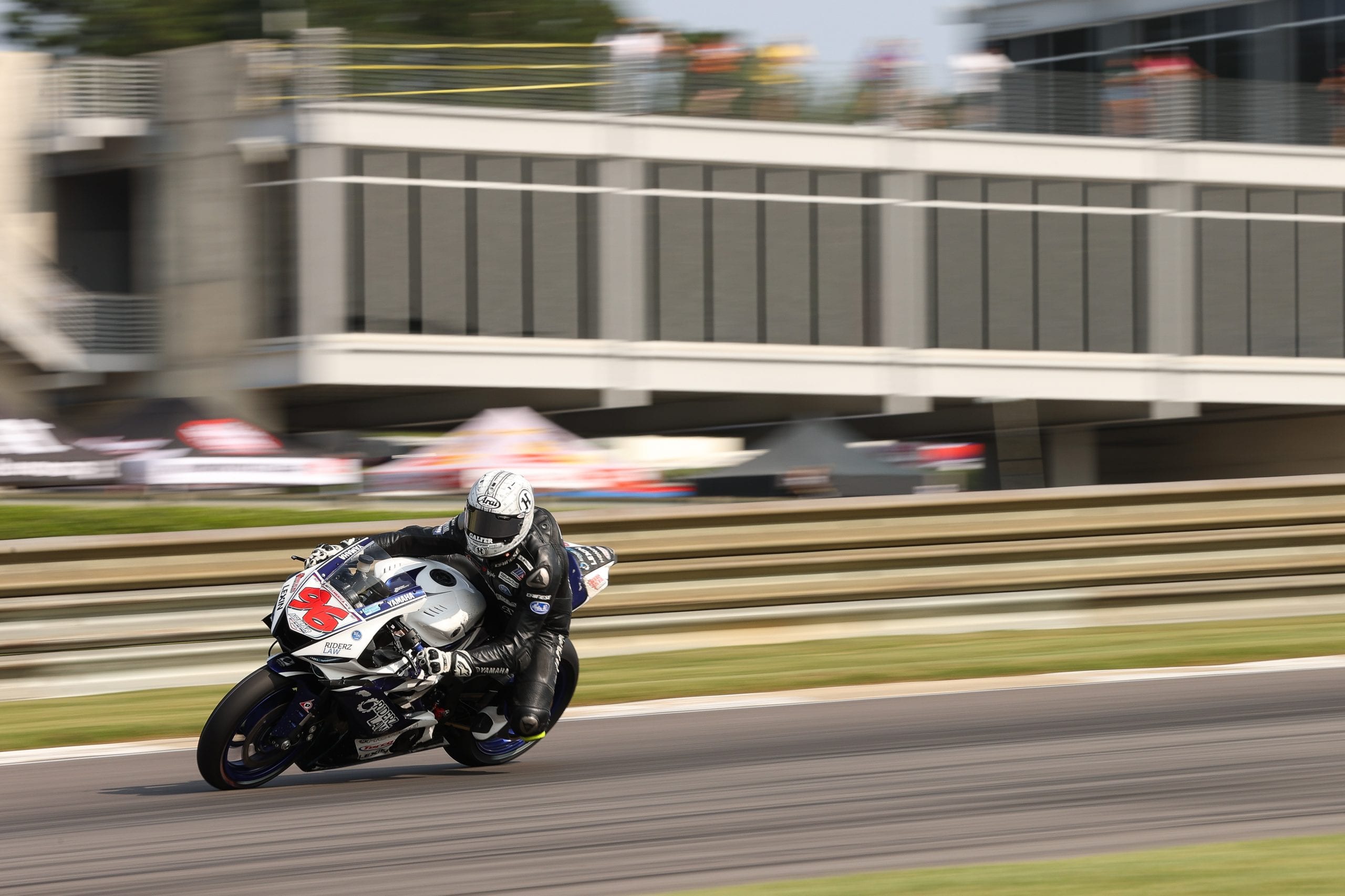 What have you learned in the 600 classes that you think will help you as you race in superbike?

There are some things I’ve learned over the years about managing a race team and that kind of stuff which will certainly transfer over. But, in the riding aspect, I think I’m going to be re-learning a lot of stuff, learn how to ride this bike. I’ve never really ridden a race-prepped 1000 on the track before. There is just so much more to a Superbike compared to a Supersport bike. It’s definitely going to take me some time to get used to it. It’s a challenge I’m looking forward to.

You pretty much are running your own team, tell me a little bit about the challenges that presents.

It’s definitely a lot more difficult but it’s also very rewarding when you get things going right. I have a normal day job that I work 9-5 then after work I go to the race shop and work on the bike and do whatever I need to do until 10 o’clock at night. Then when I get home it’s eat dinner and try to get a workout in before midnight, go to bed around 1 o’clock and then do it all over again. On weekends throw in some bicycle rides, working on the race bike and working on sponsors, and then on race weekend it’s not just show up and ride for myself, I drive the truck and trailer everywhere with my crew chief.

When we’re there (at the track) we’re all setting up the trailer, setting up the bike and all that stuff. Then I’m helping work on the bike, paying for tires, paying for fuel, trying to ride the bike then tear everything down and drive home or to the next track. I book all the travel, making sure mechanics’ flights from all around the country arrive near the same time, making sure all the hotels are booked. It’s a lot of work for sure. 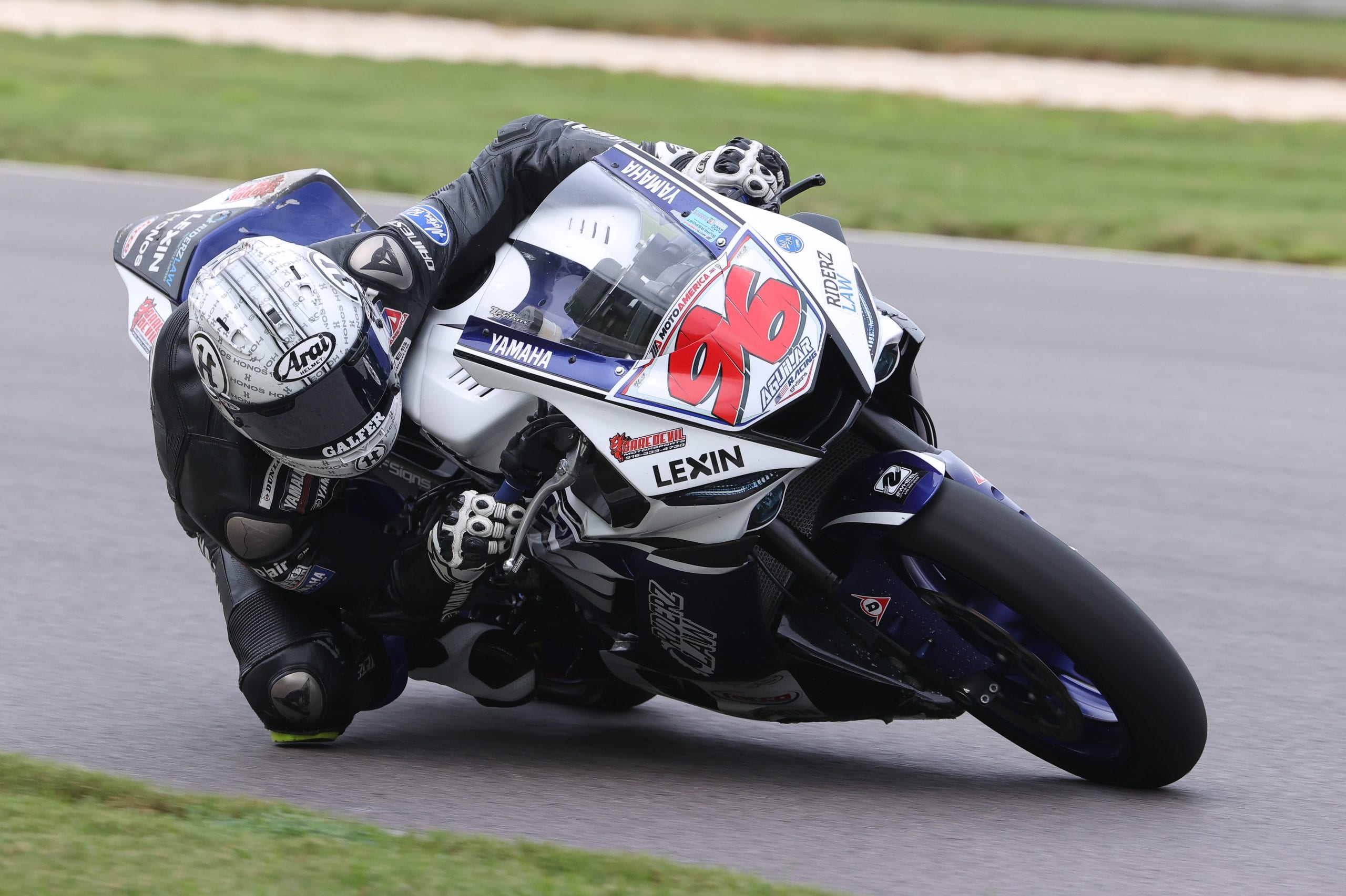 You obviously are a talented rider, what is it going to take to be able to compete this year with more experienced superbike riders?

Time. It’s going to be just time and testing. I’m kind of going into the unknown with a bike I’m unfamiliar with and we’ll be going to 2 tracks that I’ve never been to before in COTA and Brainerd International Raceway. The first superbike race in my career is going to be at COTA which is a track I don’t know. It’s just going to take time. I really can’t expect too much out of my rookie season, I need to be realistic with myself.

My goals are to get consistent top 10s and maybe a top 5 this year. I just want to have a solid rookie season that we get to build on, so we have strong 2022 and 2023 race seasons. Hopefully, we won’t have too many crashes or mechanical issues, just be consistent in the top 10. I’m trying not to be too hard on myself. Just going in with an open mind and reach the goals I have right now.

Lastly, I would really like to thank my crew, my crew chief Poncho Rangel, my mechanics this year for stepping up to Superbike with me. 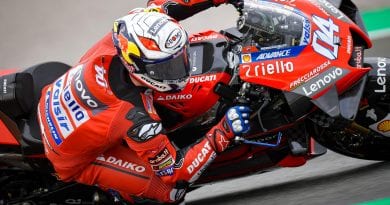 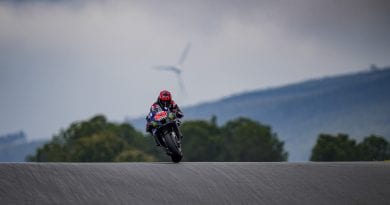 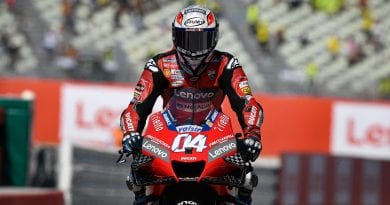