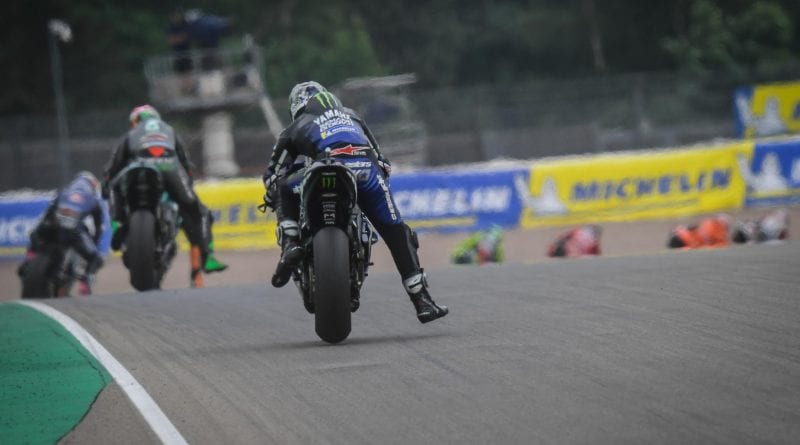 Maverick Vinales is in the worst form of his career currently, what is going on?

Maverick Vinales came into 2021 a seemingly changed man, in pre-season interviews he confirmed that his mentality was better than it has ever been, he was brimming with confidence and was happy in his abilities to go out and battle for the title. His mental strength and fortitude proved to be true in the opening race when he stormed his way to victory stamping out many people’s doubts about him.

Sadly since this race Maverick hasn’t had a single podium finish and only two top 5 results, most recently he finished dead last in the Sachsenring, 0.300 seconds behind Franco Morbidelli on a bike which is two years old.

To really delve into what’s going on we must look back further to 2020 in Austria when Vinales was involved in not one but two life-threatening incidents, in race one he was skimmed by a flying motorcycle after a crash between Franco Morbidelli and Johann Zarco sent their bikes hurtling towards Valentino Rossi and Maverick Vinales, both riders narrowly escaped with their lives after they were missed by mere centimetres.

Moving to race two he was forced to eject from his motorcycle at turn one when his brakes failed him at 140mph, the bike smashing into the air fence, his quick decision to bail from the M1 absolutely saved his life.

These incidents make you wonder, is Vinales suffering mentally from these events which unfolded, riding with PTSD or some sort of undiagnosed depression following the incidents? I am no expert here and this is purely speculation but he is showing signs of mental illness acting in a depressive manner, having stupidly high highs riding in the clouds and unbelievable lows, chopping and changing between these emotions week in week out. He’s still fast as we saw in the Catalan test when he led the field but when he’s not testing he cannot seem to hold his bottle. 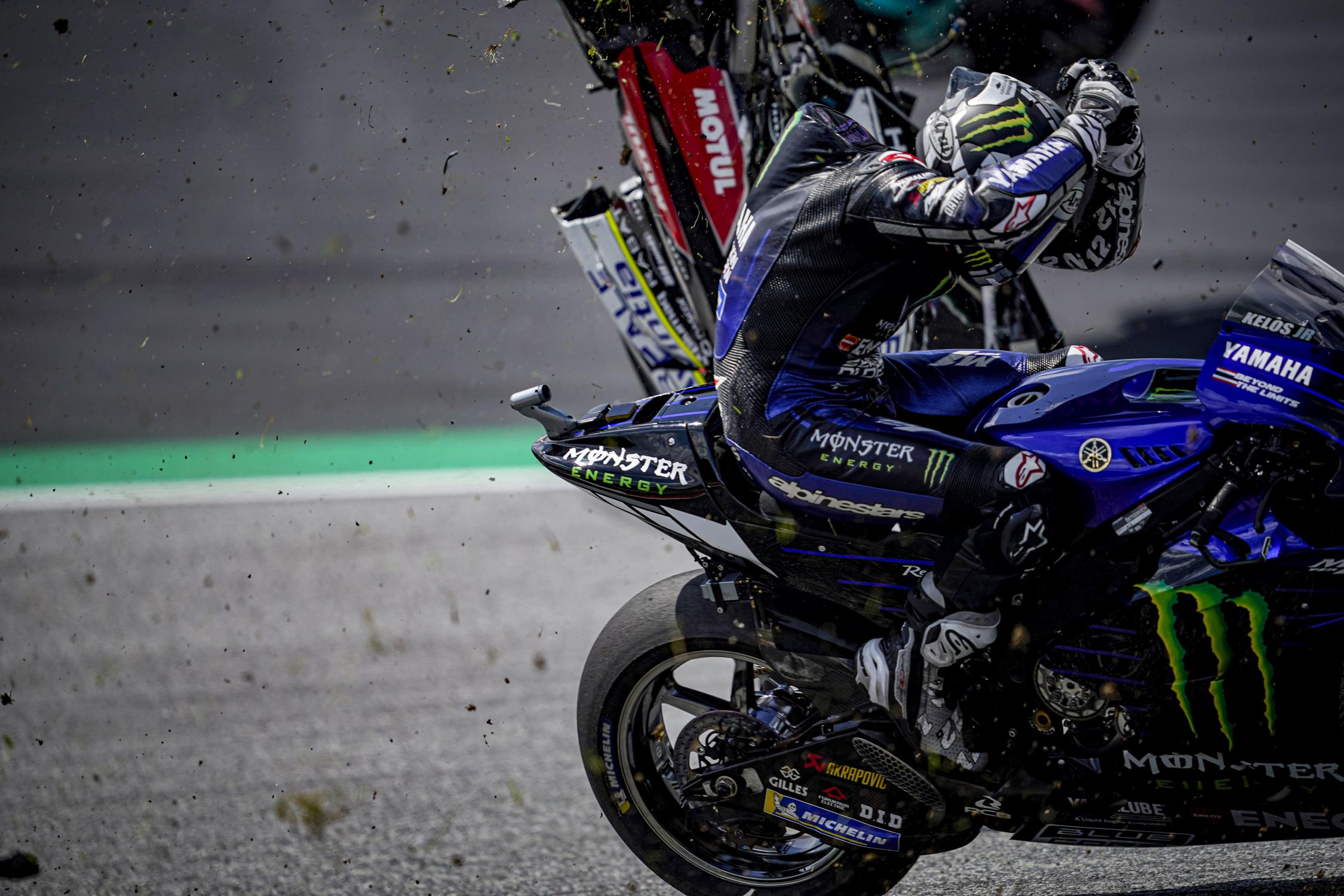 Dodging the Desmo of Johann Zarco.

Over the years since his move to Yamaha from Suzuki we have seen his personality change, he’s gone from being a very open, chirpy and happy guy to being incredibly serious and stern. We know he has had issues with his anger and frustrations in the past when he walked out on his team in 2012 mid-race weekend with three rounds to go. Eventually he was forced back but this attitude and anger doesn’t seem to have dissipated and he could be struggling with a build-up of emotion which includes Vinales not fully processing the events at Austria.

He confirmed before the season had begun that he had spent some time with a sports psychologist to try and return to form and it worked very temporarily before falling apart as usual, something else which is a common theme. Vinales seems to try these radical new solutions to win races and do well, they work for a few races before he falls back into the same routine, this includes different helmet designs, changing his number from 25 to 12 and changing his crew chief multiple times, each change has a short-lived success before Vinales falls back into old habits searching for his next idea.

Since these races in Austria Vinales has gotten married and has brought a child into the world meaning his focuses in life have shifted, he no longer can go out racing for himself knowing that if the worst was to happen he wouldn’t be leaving anyone like a child behind. Now if the unthinkable would happen he would leave behind a widow and a child without a father. No longer can he race as carefree as he once could knowing that his life is on the line every time he leaves pit lane, he has his wife and child to think about now. 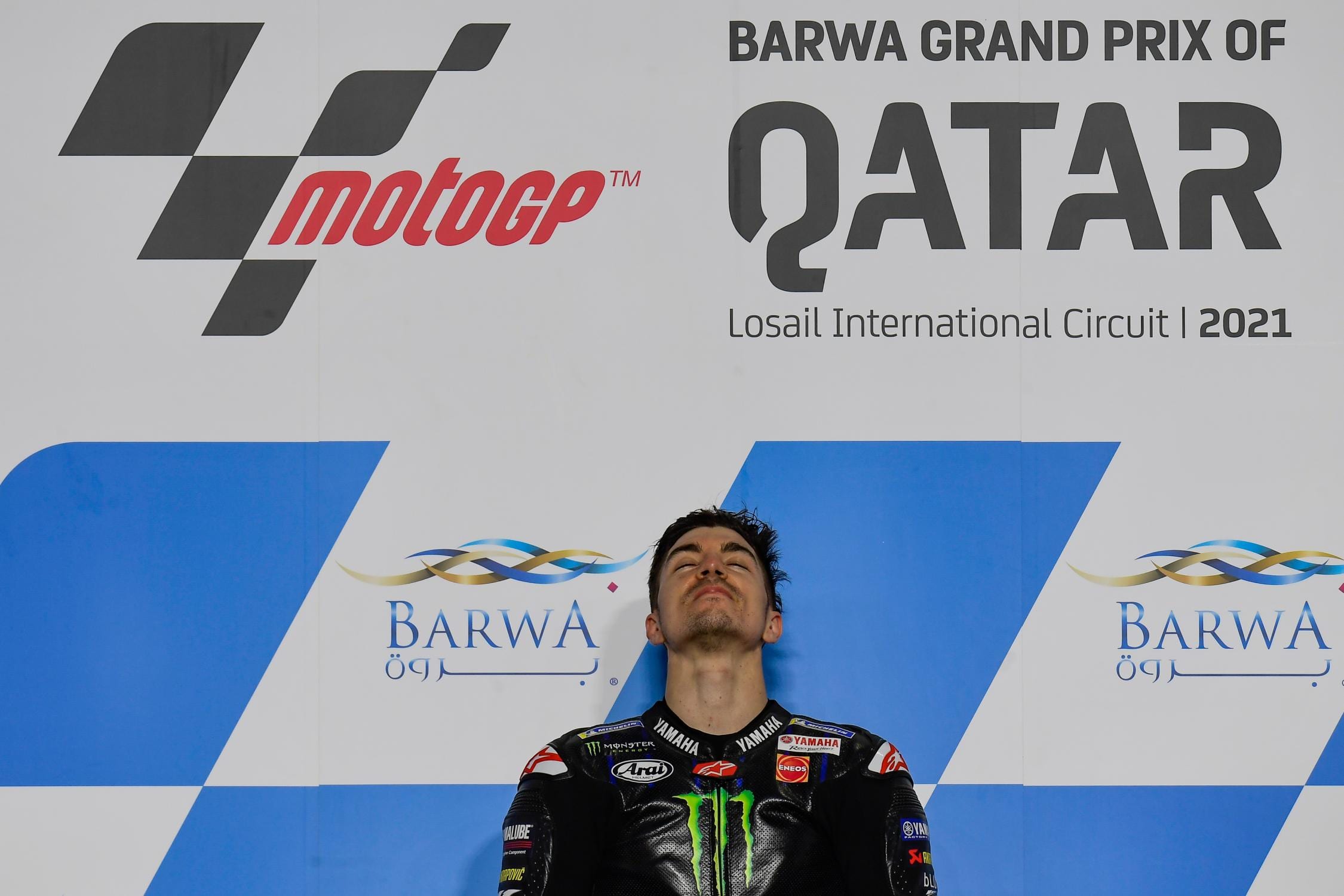 It’s hard to forget he has already won a race this year.

Looking back to 2012, MotoGP lost one of the most talented riders the championship has ever seen following the arrival of Alessandra Stoner, daughter of Casey Stoner. Many laugh and berate Stoner for leaving racing at 27 years old making comments about his wife telling him to stop racing. We all know Stoner left MotoGP because of the politics and because he hated the interviews and just wanted to race motorcycles, but you are kidding yourself if you think that the arrival of his daughter didn’t play a part in this. His crash later in the season at Indianapolis after already announcing his retirement cemented the decision in his mind, he no longer could put his life on the line when he has a daughter less than one years old.

There are many riders who don’t think like this and still can remain focused on racing knowing what could happen to their family if they were to make that sacrifice and this is completely acceptable, some may say it’s selfish but it’s all these riders know, racing is what gets them out of bed every morning it’s what drives them, if you take this away you can be sure it would send them into a deep depression.

William Dunlop is a great example of a rider who continued to race despite having a family including a child and a 7-month pregnant wife, his second child was born after he had already given his life to the sport because he chose to continue knowing that his life wouldn’t feel the same without racing. Racers are quite literally addicted to racing like it’s a hard drug, taking this away would have severe consequences as we saw with Maxime Burger who struggled to adapt to life after racing eventually taking his own life at 28-years-old.

Vinales is in an incredibly delicate situation right now with much more than meets the surface, he is very clearly struggling whether he will admit this or not and something needs to be done, Yamaha need to take action now before it is too late and this spirals out of control. They have an incredibly quick and still competitive test rider namely Cal Crutchlow who would be able to fill in for Vinales if they need him to, mental health absolutely needs to be looked at as seriously as it would be if he had broken his arm or his leg.

The key to his issues could be a mix of mental health struggles and the thoughts of racing whilst he has a very young child at home which are messing with his head sending him spiralling out of control.

Now everything we have said here could be completely false and he genuinely could just be struggling to adapt to the bike and work in the team given that he is a clear #2 rider with Fabio Quartararo Yamaha’s favored title contender but his behaviorisms and mannerisms tell a very different story and should not be taken lightly. 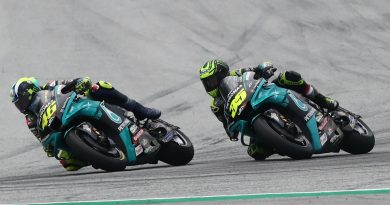 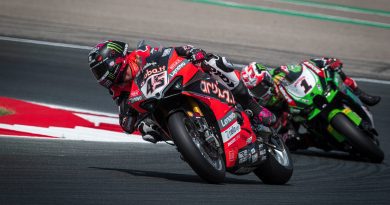 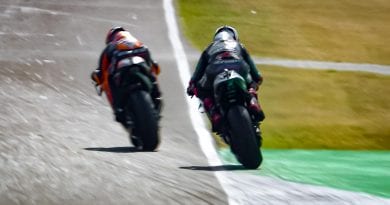 MotoGP Emilia Romagna: Fabio Quartararo “I did not get a track limits warning”